Setters are thought to have originated in different parts of UK and Ireland. They were bred for hunting game birds like grouse and pheasant.

The setter is a good-natured dog, and fits in well with the family. Regular brushing and trimming helps to keep the coat tidy.

Setters are classed as gun dogs.

How different breeds of dogs originated. 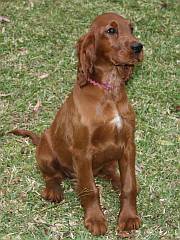 The Gordon setter was bred in Scotland by the Duke of Gordon in the 1800's. There may be some collie in the ancestry as the breed was used to herd sheep as well as hunt on the country estate. The dogs pointed to birds or game and crouched while hunters threw a net over the birds and caught them.

Gordon setters are easy to train. They love to go for runs in the country and are not suited to being kept in a small yard.

Gordons are the heaviest of the setters. They are big, lively dogs and not suited to life in a small flat.

Setters are energetic dogs and need firm handling. A training class will help. Owners need to be consistent with laying down the rules. 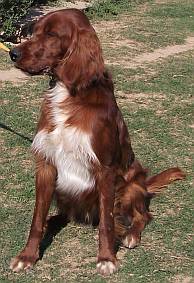 English setters are good with children and love to play.

Colours: black and white, orange and white, lemon and white, liver and white, or tricoloured. The word "Belton" originally referred to the town of Belton in England. It now refers to the colour of the dog. There are 3 Belton colours: orange Belton, blue & tan Belton, & blue Belton.

Irish setters developed in Ireland from hunting dogs. In the 18th century, they were red with white markings, but by selective breeding the white was discouraged leaving the mahogany colour we have today.

Irish setters are friendly dogs, and not considered watchdogs. They love a romp in the country.

The dogs have a long, lean head with a kind expression. The coat is long with graceful feathering.

An Irish setter can be any height, but they are normally around 61 - 65 cms at shoulder.

Barbara Simpson, South Africa, shows her dogs. Wellington, now deceased, did wonderful work visiting elderly peoples' homes, handicapped adult and childrens' homes, and critically sick homes.  They loved him and it made a difference to their day.

Llewellin setters are named after a nineteenth century Welshman -  R. L. Purcell Llewellin - who developed the breed. At the time of writing, April 2008, Llewellins are not recognised as a breed and cannot be registered with KUSA. They are seen as a sub-type of the English setter. But a few have been imported.

They make good bird hunters and loyal pets. The colour and markings can be the same as any English setter.

Above: Kite, a Llewellin setter, belongs to Richard Wostenholm,  South Africa. Kite is white with black and brown ticking. Joplin, a Llewellin setter, belonged to Mr & Mrs Pringle, South Africa A person who hunts birds is a fowler, a fowl being a bird. The fowler needs to be careful his dog does not get caught in a snare laid by a poacher. A snare is usually a wire noose cunningly hid in the bushes. The hunter may catch his foot in one. The Bible says that if we stick close to God, He will protect us from the snare of the fowler and all the things that try to ensnare us. Psalm 91.

More pet topics on this site